Physicians will say that metronidazole toxicity is “rare.”  That it’s so rare, it can’t be happening to you.  They are wrong.  Metronidazole/Flagyl is the most reviewed antibiotic on drugs.com; it’s the second-most reviewed antibiotic on webmd.com (second only to Levaquin, a drug with four black-box warnings about it’s effects, including damage to the central and peripheral nervous system).

And on askapatient.com, a site only for reviews on medications, metronidazole/Flagyl is the most reviewed drug, period.  This is compared to all other meds, including antidepressants, antihistamines, contraceptives, blood pressure medications, antipsychotics, and opioids.

In addition to this, metronidazole/Flagyl has the 5th-highest number of 1-star reviews on the site, and no other drug has more complaints about:

It has the second-highest number of reviews for confusion and also paranoia.

What is “rare” are doctors recognizing metronidazole’s neurotoxic effects.  Patients are being outspoken about this problem, but unfortunately, hardly anyone in the medical community is listening.  Our online FB support group started in May of 2016; there were 3 of us.  Now, May 2020, there’s almost 1,000 and we’re growing bigger every single day.  Of almost 1,000 metronidazole sufferers, only 5% have doctors who recognize the patients are having an adverse reaction to metronidazole, even when the patient initiates the conversation and expresses their concern.

This page is for the official FDA report, systematic reviews and case studies about metronidazole toxicity; however, please note a few things:

This report is only between January 1st, 2015 and July, 2016 (I asked just for all of 2015, but this is what they sent me).  All the symptoms listed are in medical terms; I’ve “translated” them; you can view my version here.

The FDA has WARNINGS about metronidazole’s cerebellar toxicity, peripheral neuropathy, optic neuropathy and seizures on their official label.  It, unfortunately, is limited on its recognition on autonomic dysfunction and psychiatric issues; there are symptoms listed under their ADVERSE REACTIONS section, but not all of them.

In 2019, another systematic review was published by Elsevier, noting (again) the neurotoxicity related to metronidazole toxicity.  This one, just like the last one, notes the damage caused to both the cerebellum AND brain stem.  Systematic Review – MT Toxicity 2019

Below are all the individual case studies I’ve collected over the last few years.  Most are about central nervous system toxicity only, but there are several where a patient has both CNS toxicity and peripheral neuropathy.  Some are too long to post here, so you can follow the links to see more details.

Updated: here is a new case study, 2019, where metronidazole toxicity is noted as a mimicker of Wernicke’s (brain dysfunction due to thiamine deficiency), but no one tested nor gave the patient a thiamine treatment.  The patient did not recover.  Metronidazole induced encephalopathy: A rare side effect with a common drug 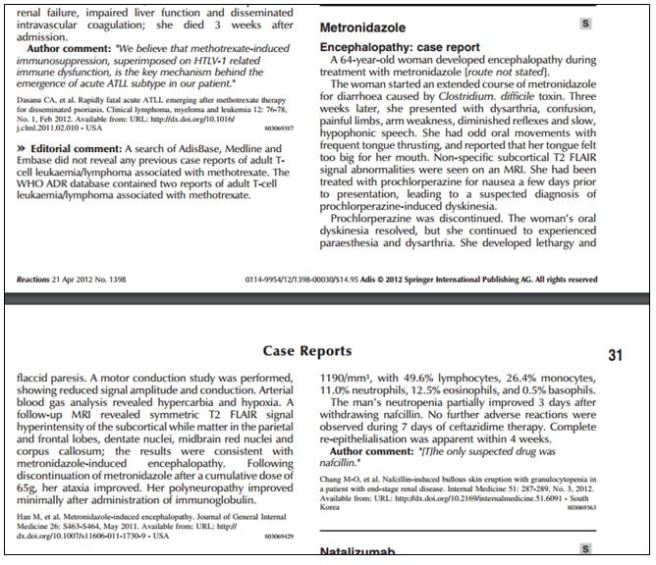 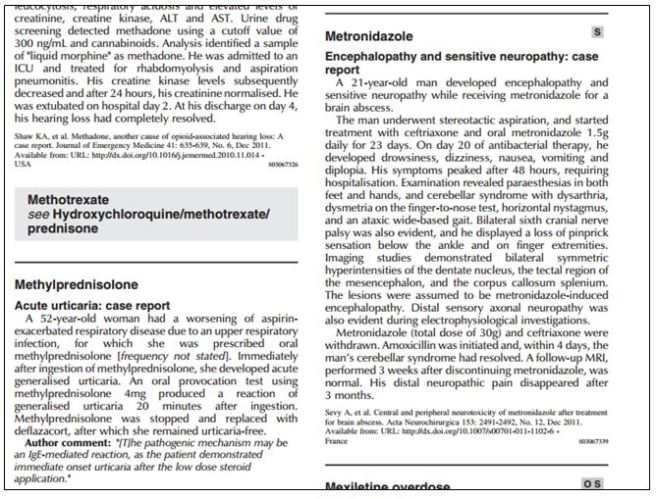 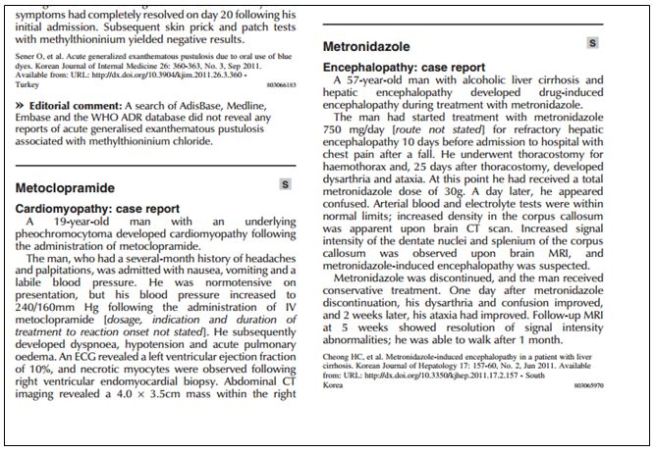 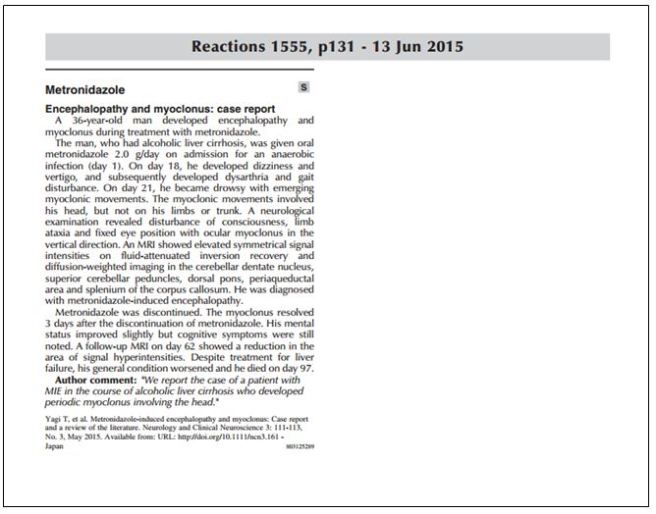 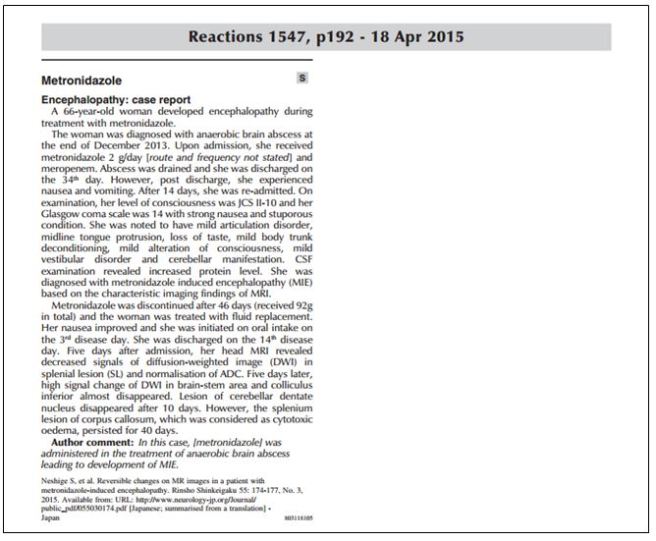 This one is too long, so it’s two separate images. 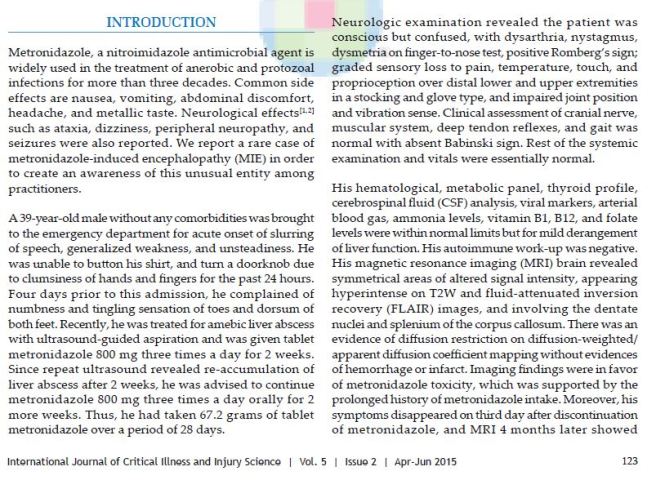 This one is about nonconvulsive seizures due to metronidazole.  You can find the entire article here.

This next one is too big ; you can view the entire case report here.

This one is also too big to view; to see full article, click here.

This next one is in TWO sections and is a report of 8 cases in 1: 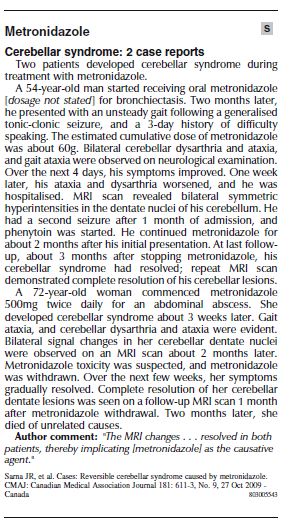 This one is too long; you can view fully by clicking here.

This one is in two sections; see below.

This one is too long; to view fully, click here.

This one is in 2 sections:

This one is too long; to view fully, click here.

This case report is long; click here to read the entire article.

This one is about metronidazole-induced peripheral neuropathy, another serious issue with metronidazole.  I only have the abstract (sorry!) 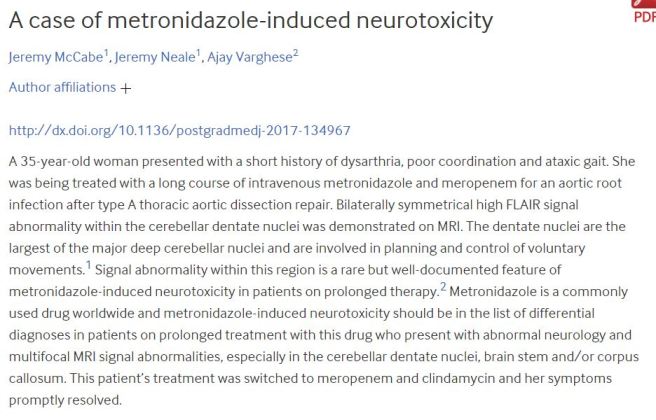 This one is a case report but the full article goes into details about other patients.  Click here to read the entire article. 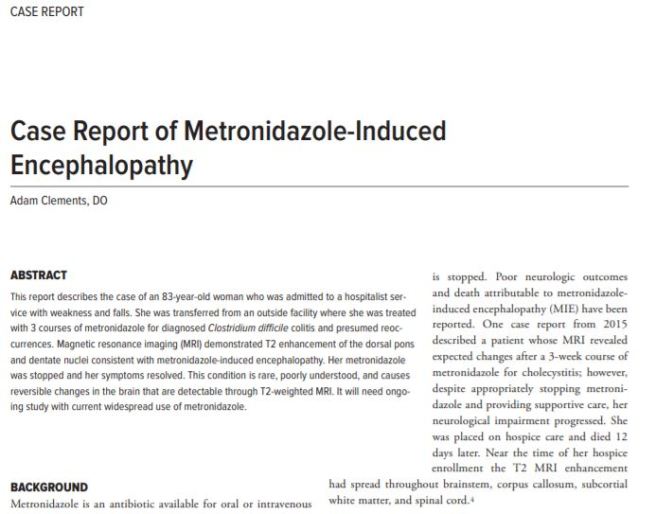 This one talks a bit about the cause of metronidazole neurotoxicity, including the similarities between metronidazole and Wernicke’s encephalopathy.  To read the full article, click here. 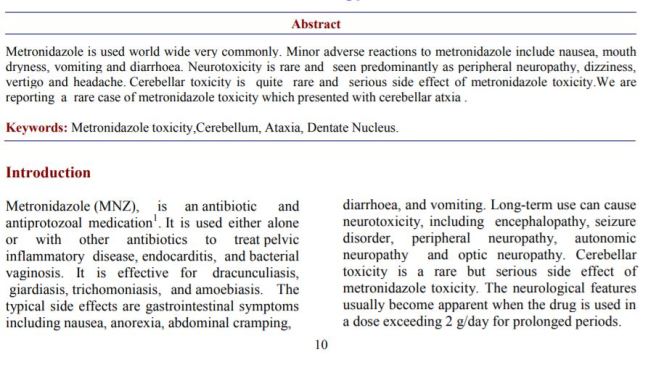 This one is too long; to read entire article, click here.

This case study is too long; to read entire article, click here. 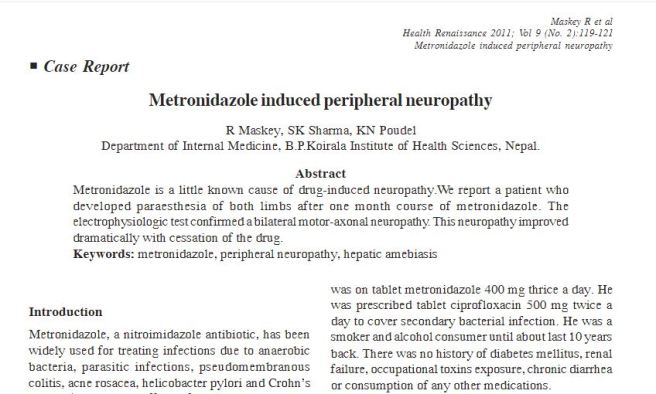 This one is divided into 3 sections:

This one is a little longer, in 3 sections: 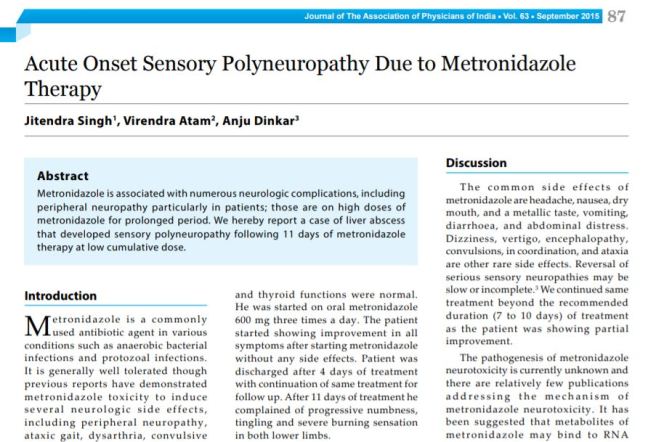